When I am not busy doing all things real estate at the T Williams Realty office, I enjoy my other career as an elementary school teacher. In my previous post I told you all about our great potato dig in the school garden. Well, just last week we finally enjoyed the fruits of our labor. All of the students at Orcas Island Elementary School helped to make and then eat some garden fresh roasted potatoes! 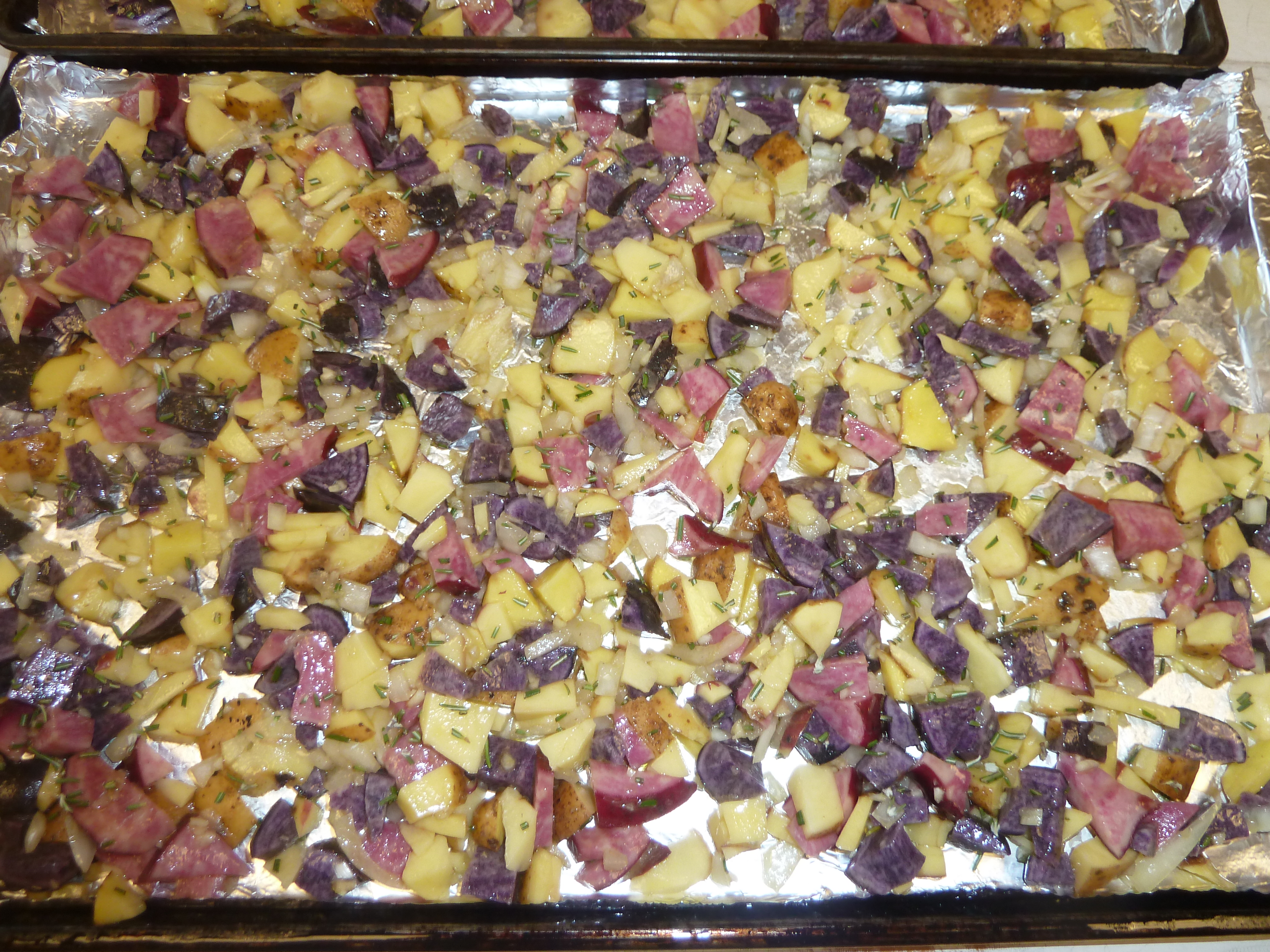 Our yummy garden fresh roasted potatoes- just look at all those colors!

The potatoes were stored just the way they like; cool, dark, and dirty. They spent the past three months stored in cardboard boxes and covered with shade cloth in a rodent free, unheated garage. When we opened the boxes they were just as firm and glorious as the day we picked them. 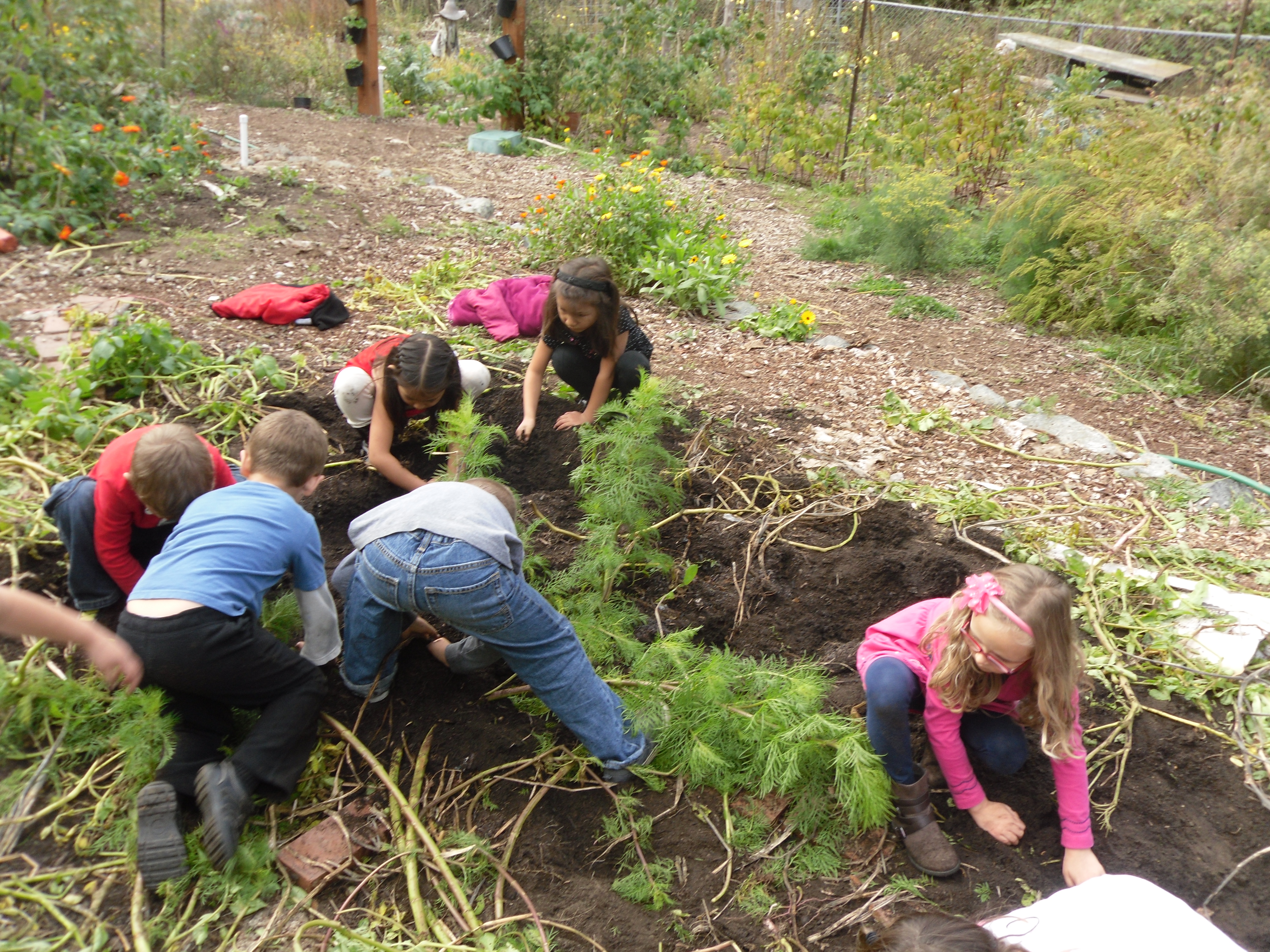 Kindergarten students digging up the potatoes in the school garden last fall.

In the classroom the children are divided into working groups: Potato cutters, onion dicers, garlic peelers and mincers, and the rosemary choppers. Yes, all of the groups will be using knives. Children and knives? At school? Yes! The students are taught safe knife handling skills starting in Kindergarten. The rules are followed closely because the children know that using the knives is a privilege that must be taken seriously or they will lose it. Kids LOVE to be helpful! Sometimes we adults forget to give them the opportunities. Not in Farm to Classroom– all students are taught to use tools and expected to do their part! 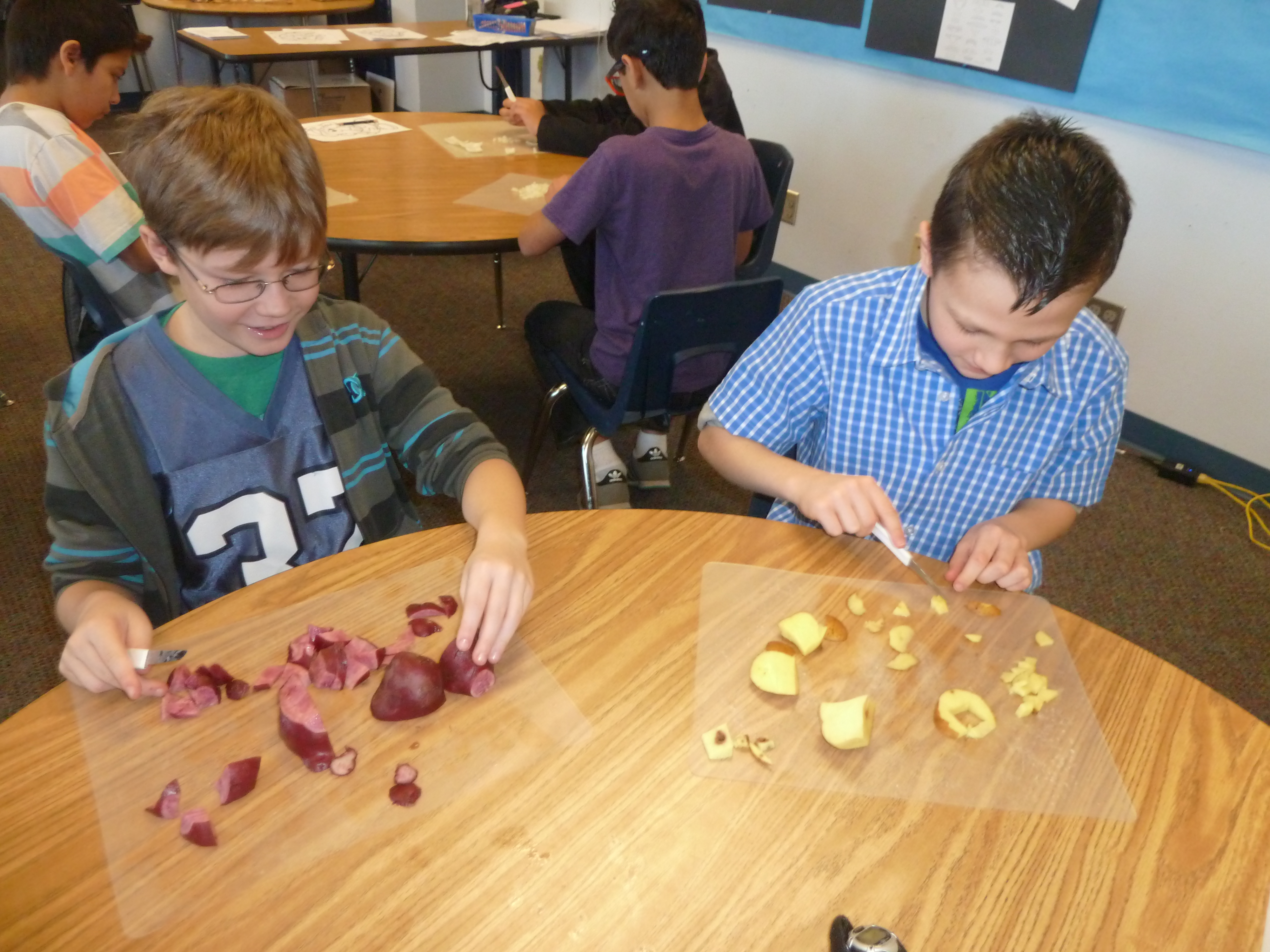 Once the cutting commences there are ooohs and ahhhs as the purple majesty and cranberry red potatoes are sliced open to discover that they are also colored on the inside! 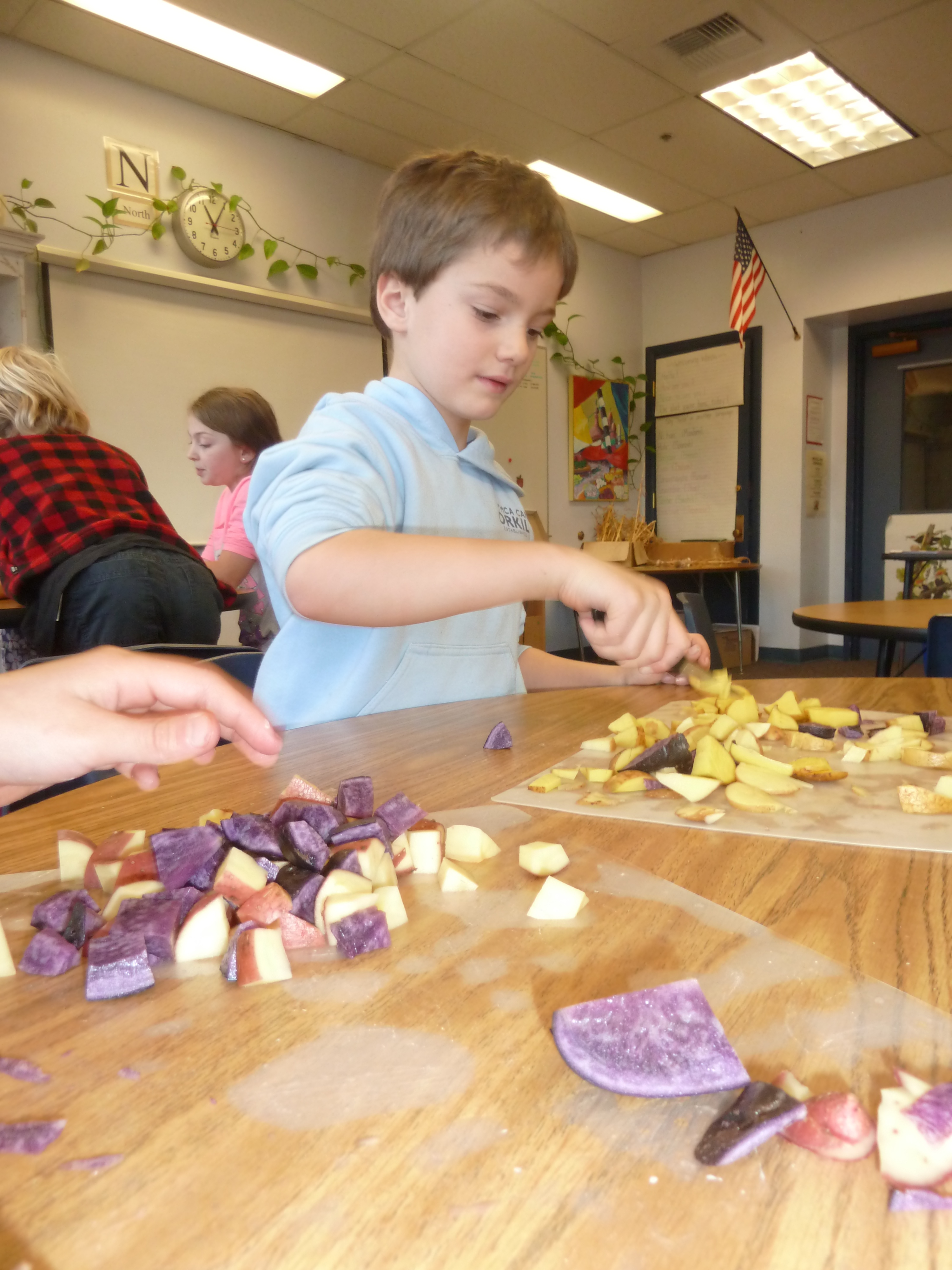 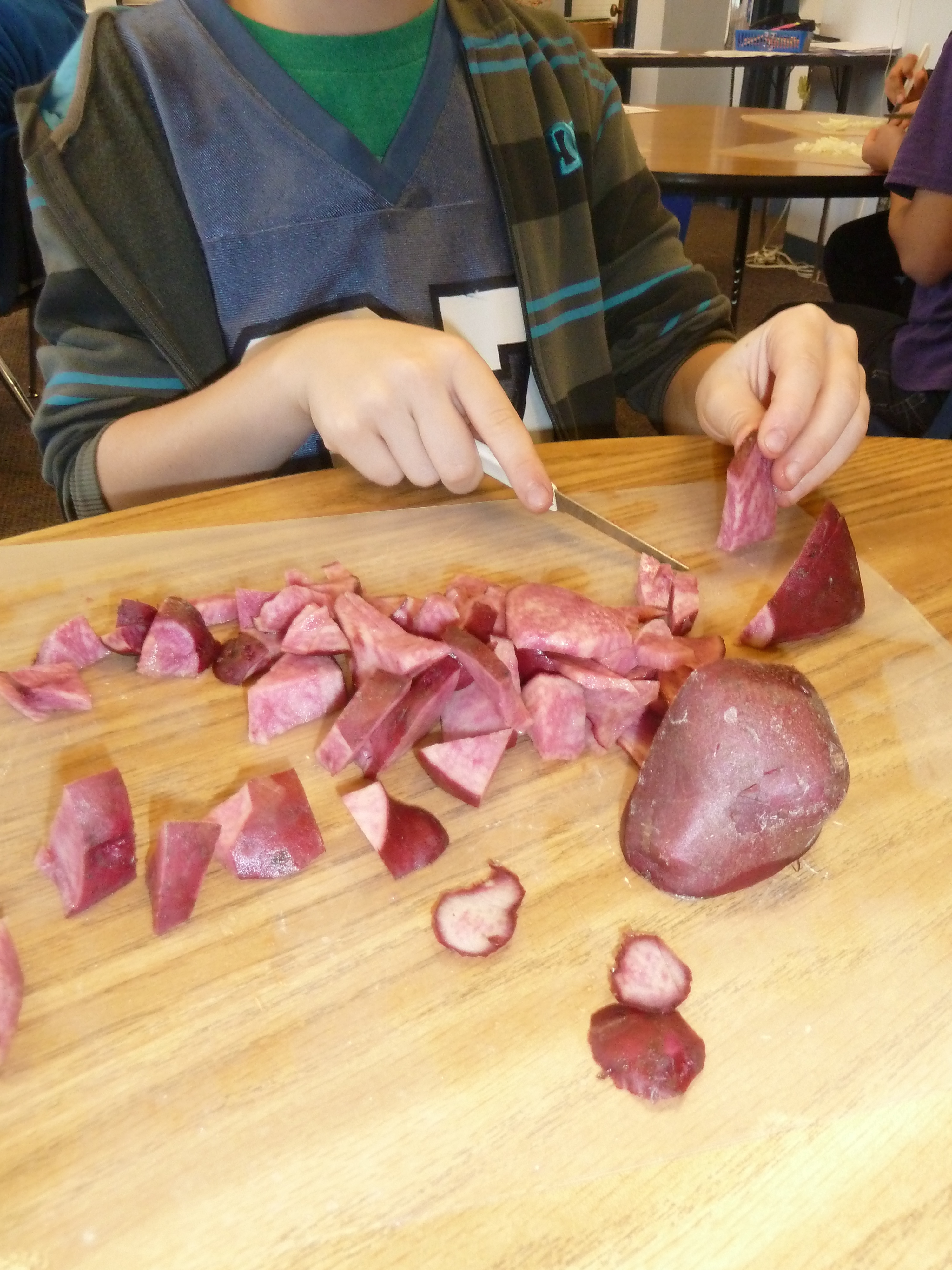 The Cranberry Red potato- red through out!

The onion group starts to complain of watering eyes. The peeled garlic (harvested from our garden) starts to fill the room with its distinct scent. The rosemary group is focused on cutting tiny pieces so it doesn’t “feel like we are eating the Christmas tree”. 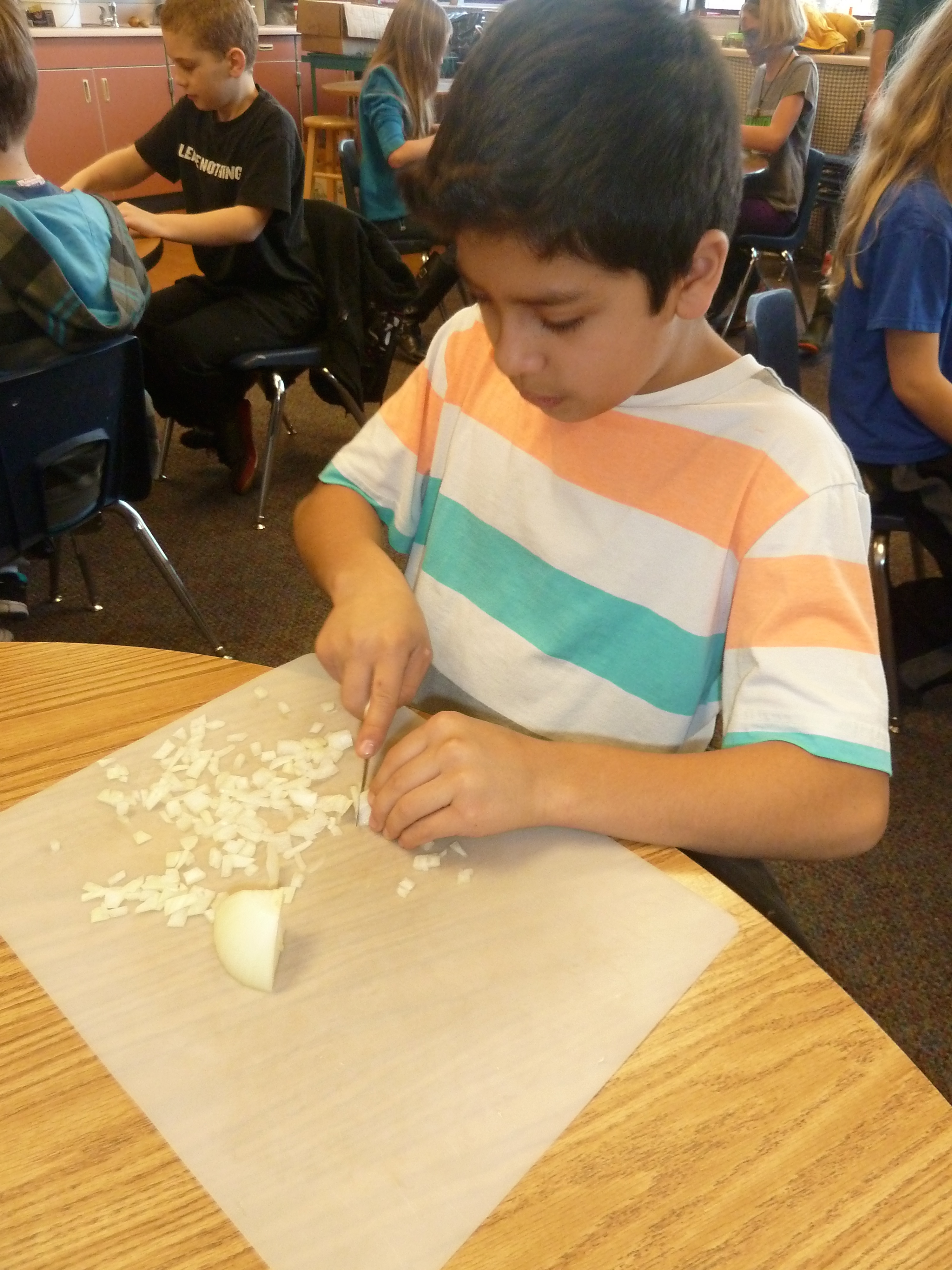 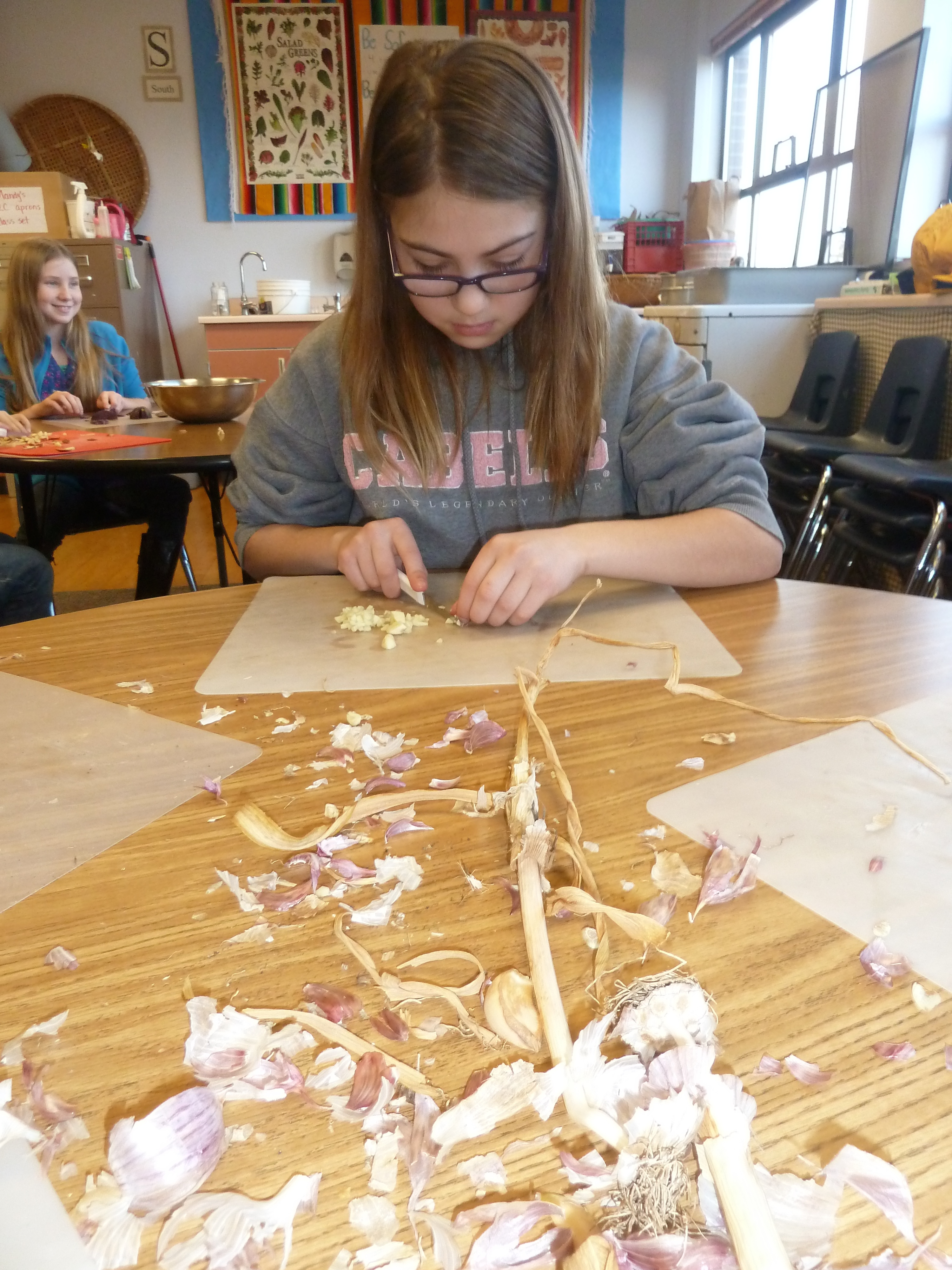 Peeling and mincing garlic grown in our school garden. 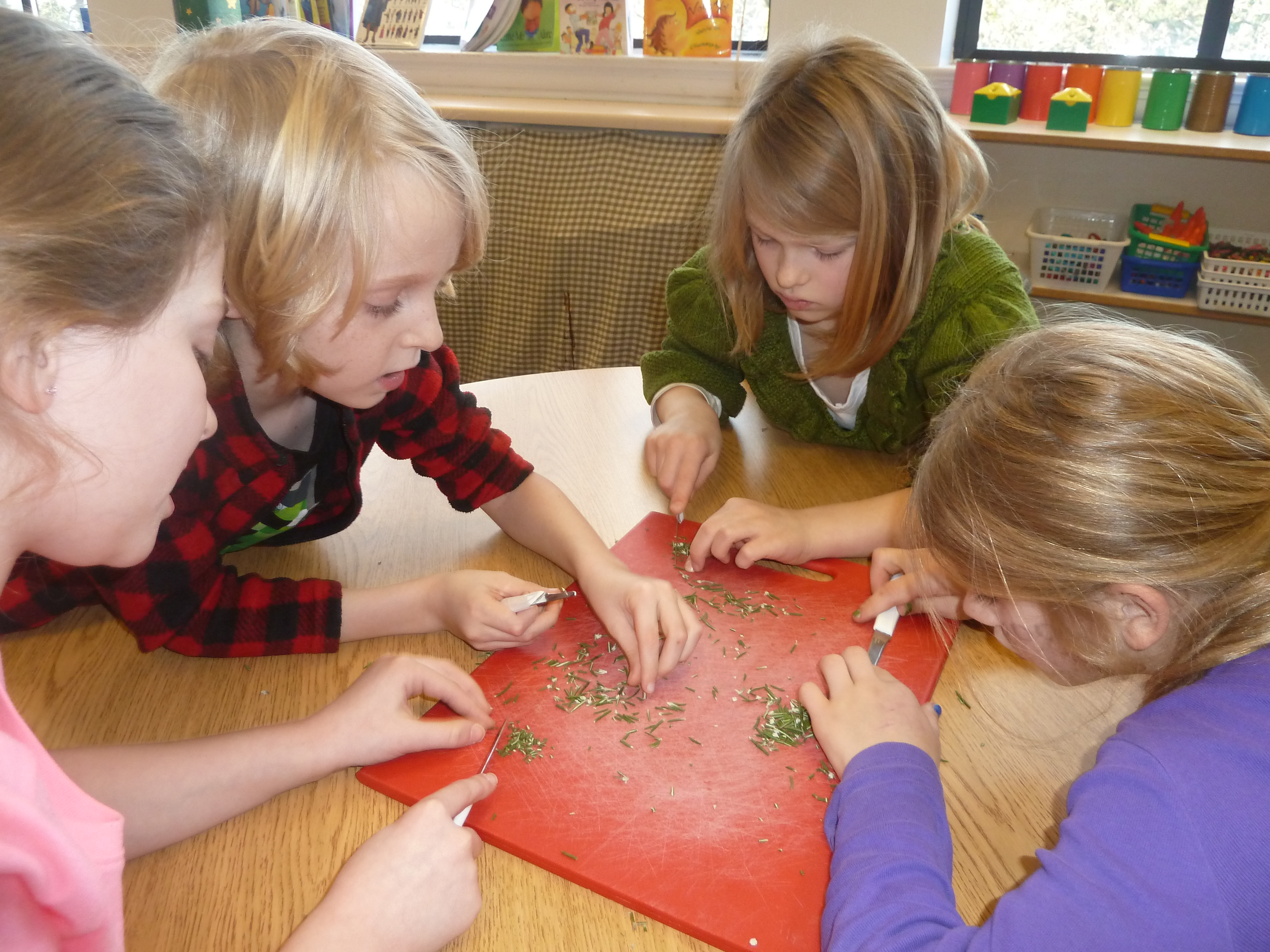 Focused on chopping the rosemary into teeny-tiny pieces.

With the chopping complete the potatoes, garlic, onion, and rosemary are tossed together with olive oil and some salt. 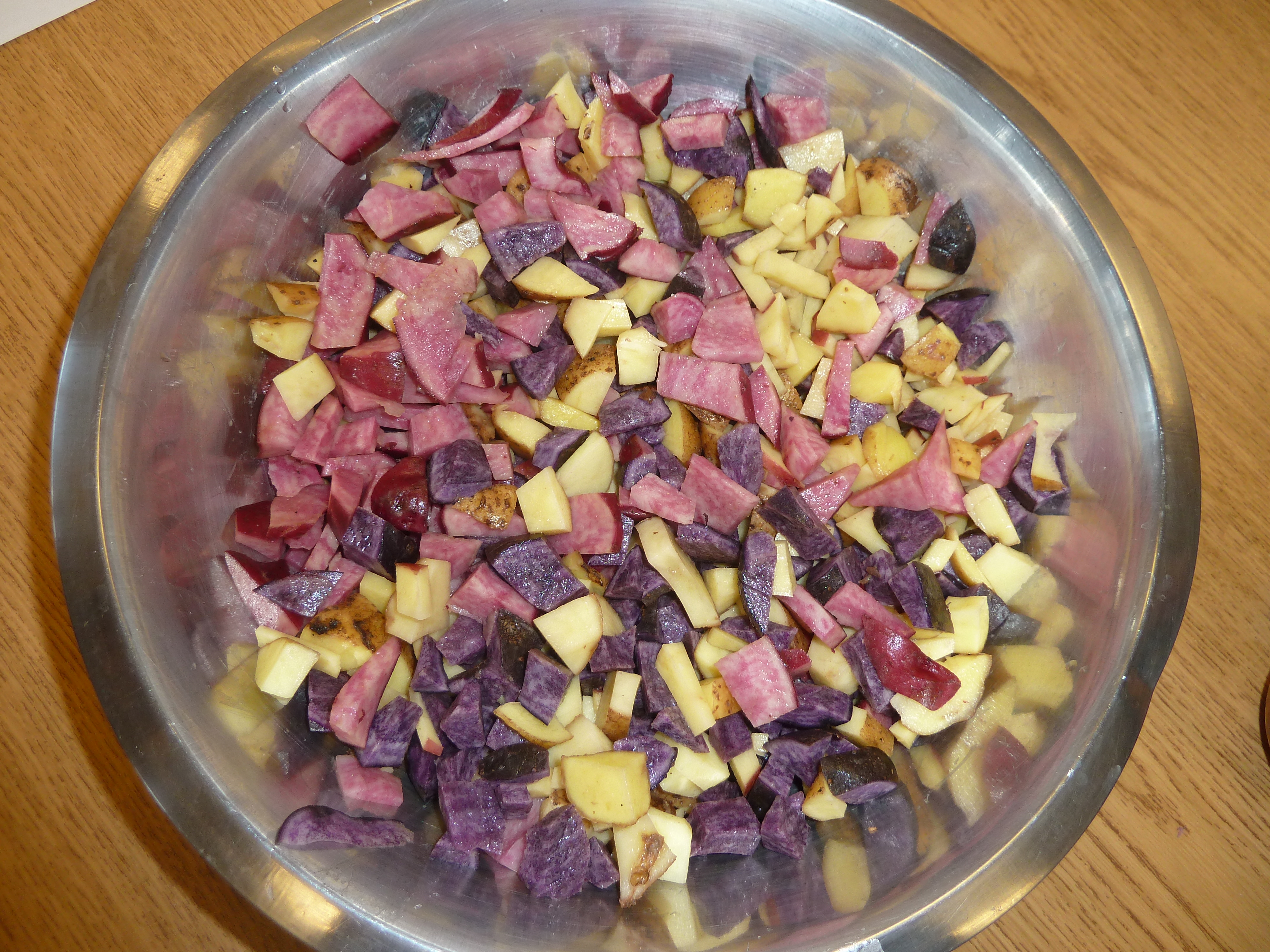 A very colorful bowl of potatoes.

Off into the oven set at 450 degrees for about 15 minutes.

Our garden fresh roasted potatoes are so delicious! The children loved eating them and you will too!

Spread out in one layer on a baking sheet

The Shocking Truth: We Get Sun In Winter

On Friday I had the pleasure of showing property all day to a couple who are thinking about retiring here. They scheduled their trip for January so they could experience the worst of our weather, fully expecting rain and gray clouds. Well, take a look at the photos I snapped throughout the day: 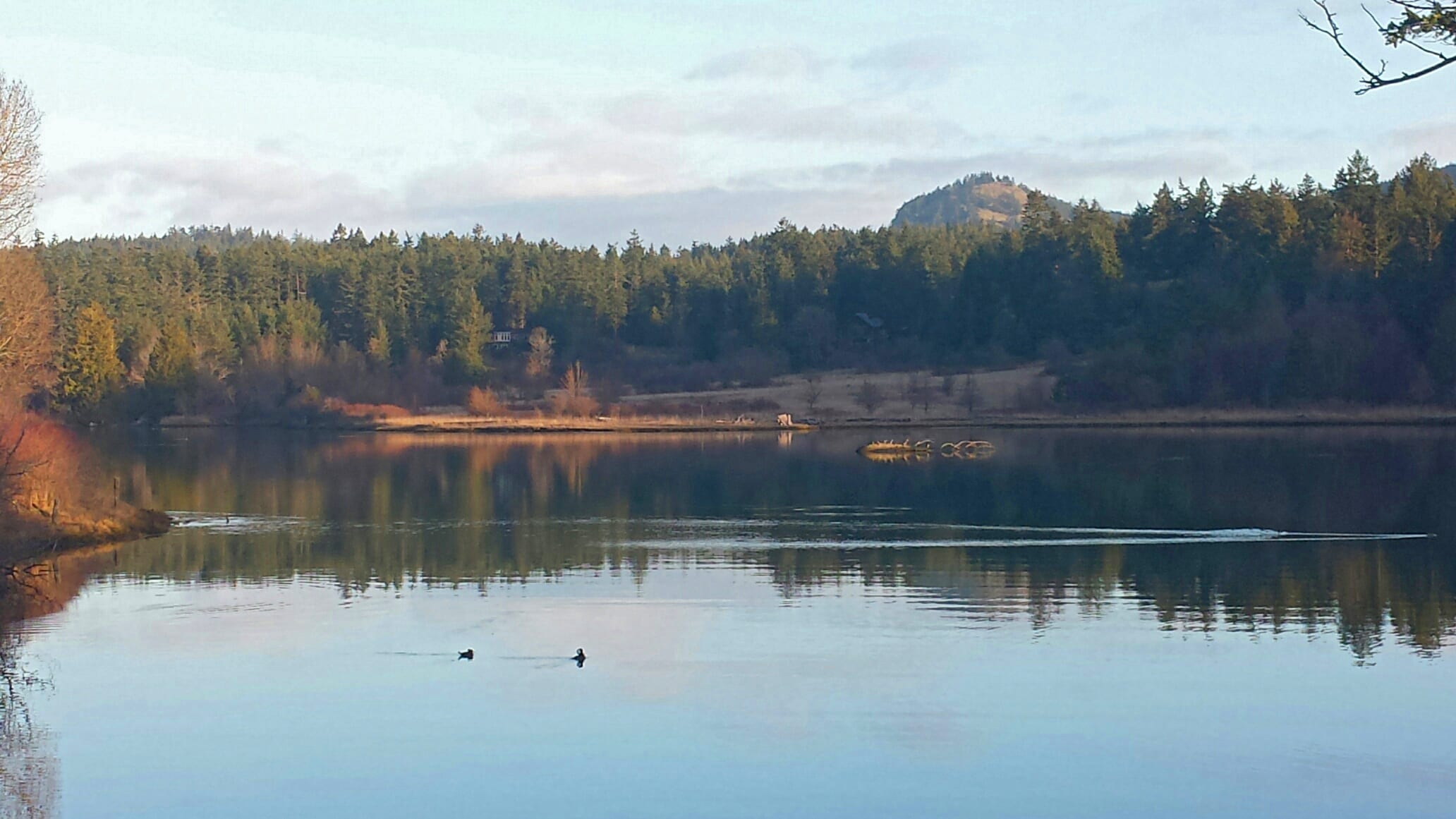 Taken at 9:00 am from the Deer Harbor bridge overlooking the estuary. Pair of Hooded Mergansers gliding by, with Turtlehead peeking up behind the treeline, catching morning rays. 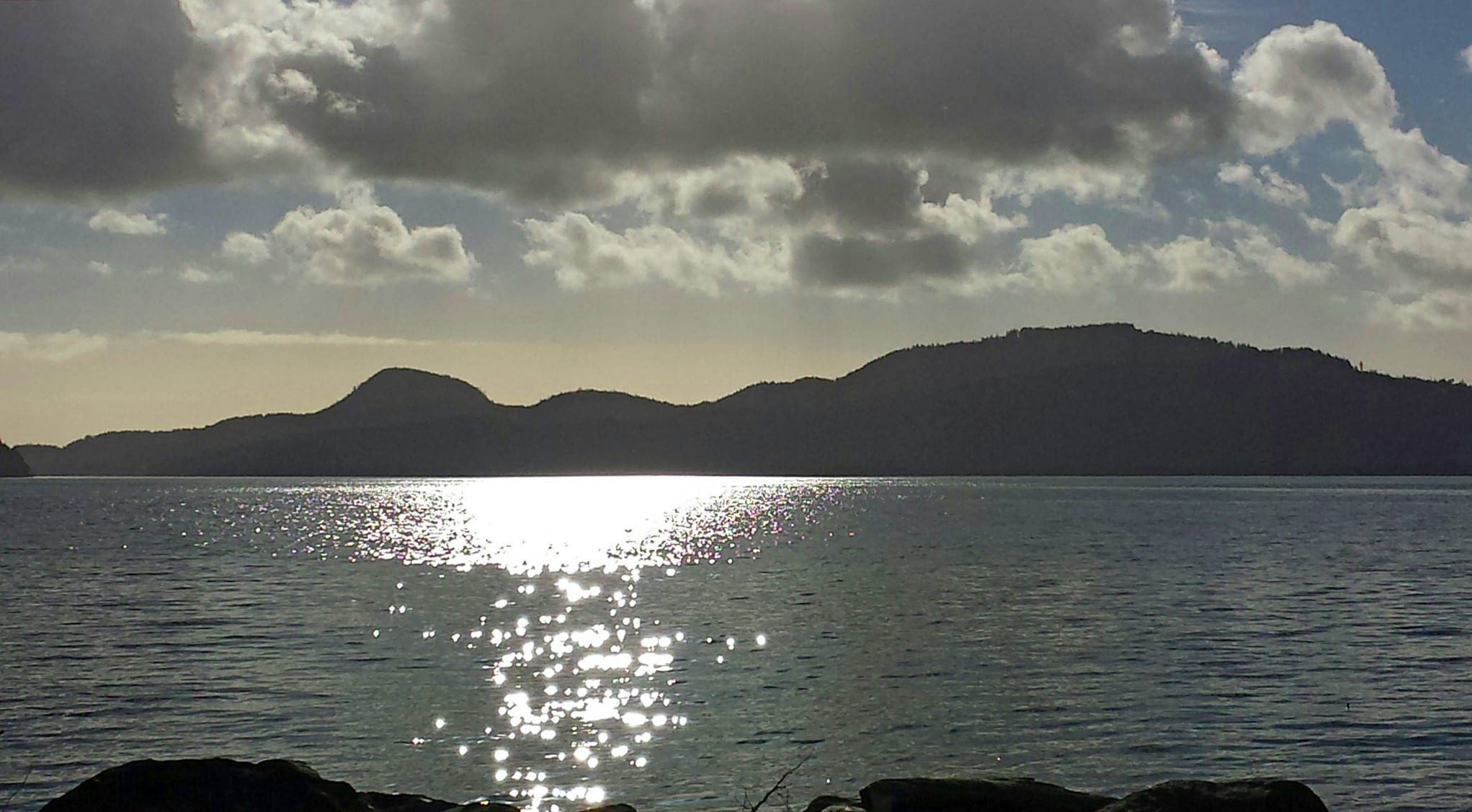 View from Crescent Beach, taken midday on the way to lunch in Eastsound. Temp was a balmy 44 degrees. 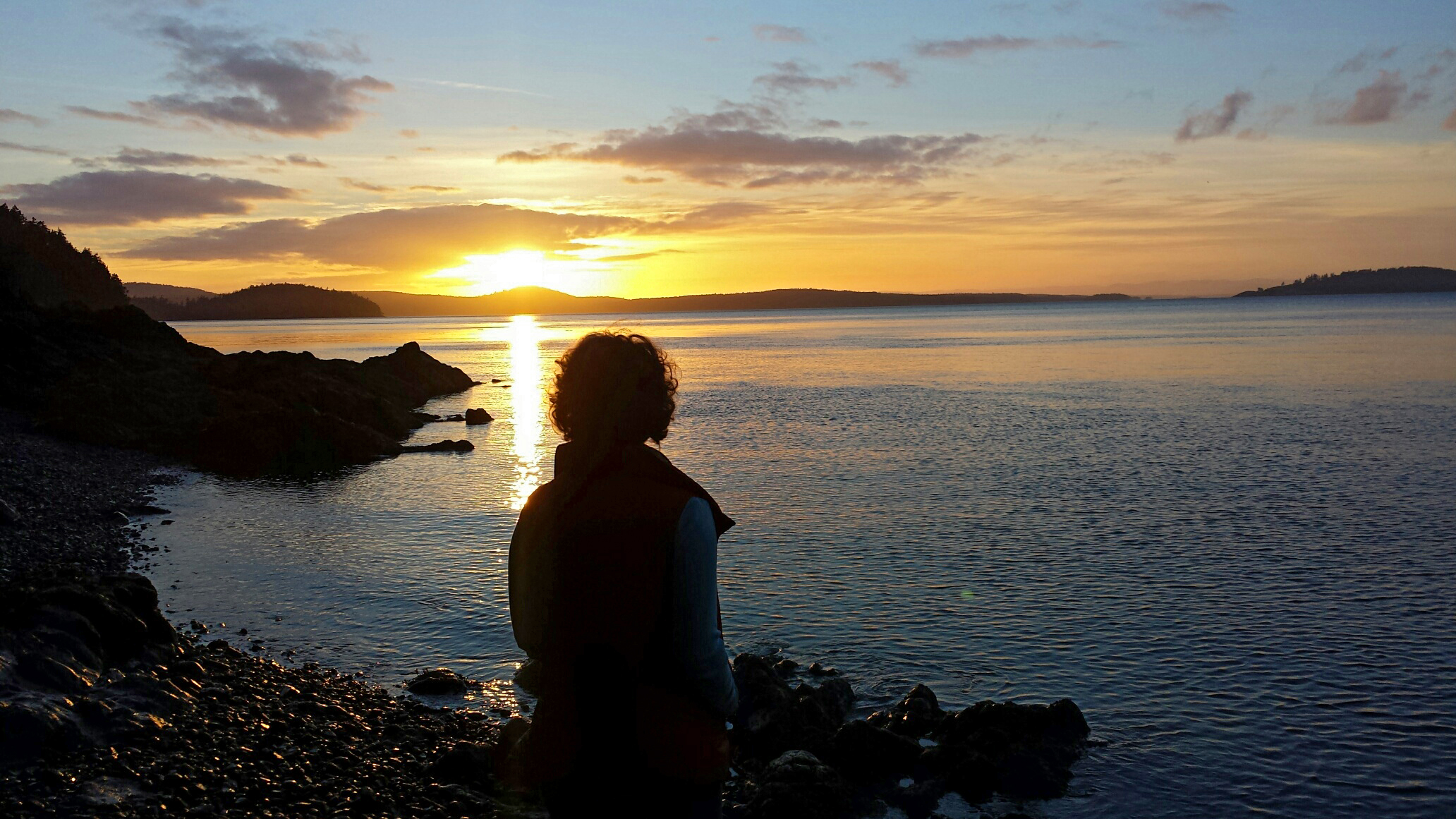 The day ends with an exquisite sunset over President Channel on the west coast of Orcas. Who could resist?

I’m not claiming that we get sun all winter long, but more than you might think. It’s part of the rain shadow effect created by the Olympic Mountains, which keeps the San Juan Islands drier than other parts of the pacific northwest. So if you’re thinking of an Orcas getaway or property scouting hunt, make sure to pack your sunglasses – even in January!

Comments Off on The Shocking Truth: We Get Sun In Winter

Christmas Gift Aboard the Blue Pearl

Every other year Jay and I find it’s just the two of us on Christmas morning. We actually look forward to these holidays as much as the full-on grandma-and-pa celebrations with all the trimmings and train set running under the tree. This was our year and the Blue Pearl called for us to pull her away from the dock and breath the fresh salty air. Loaded down with a baked Coffelt ham, fixings for Debbie Woodruff’s garlic potatoes, my garden spaghetti squash, long johns and earmuffs, we pulled away from the dock at 3:00 on Christmas Day. Little did we know it would be a cruise to remember.

We see only one other sailboat on the way, plus four powerboats.

A half-hour under way it dawned on me – we are going to lose daylight! Probably a good time to ask Jay what is on his mind for the night. We usually tie up to a dock this time of the year as it’s warmer, you sleep better and wake up where you left her the night before. Windless, blue sky scattered with white clouds and sun on our face, we arrive at the Port of Friday Harbor at 4:08. Not bad, very calm, saw four powerboats and one sailor.

On the foggy, cold morning after Christmas, the Blue Pearl heads north to Roche Harbor. No wind again (Jay says we really have a power boat). No sign of another adventurous sailor, we cross paths with Washington State Ferry headed to Vancouver and the Pintail barge.

We bring up 16 crabs in our pot, three keepers.

Arriving into Roche Harbor at 2:44, we dropped two crab pots and cruised the harbor (Laurie and Eric say it should only take 30 minutes and fresh chicken). Half an hour later we had 16 crabs in one pot, three keepers. Tie to dock at 4:11. Ready for warmth and a hot toddy.

Crab on ice, we head to Roche restaurant, all lit with festive lights and music of the season. It really does feel like Christmas!

A lazy morning turns into a “get your butt in gear, we need to go with the currents and get back to Orcas!” It was very windy with dark clouds as we motored through Spieden Channel. Nobody was out except the Coast Guard and a few fisherman. Throughout the trip, I kept saying to Jay, “wouldn’t it be a wonderful gift to see whales?”

Just then, off the north end of Jones we see what looks to be a porpoise, but turns out to be a mother and baby whale swimming. A few air blows of spray in the air and our hearts were racing. I run to get my iPhone and push the video button. No matter how many times or how many of these beautiful mammals you see it is always very exciting and memorable. So much so, you better memorize it in your soul because if you are like me, all you get on the video is sky and your feet with a lot of vocals that sound like “oh wow, oh wow, oh wow!” We must have been one of the first to see the new baby orca, Calf J50. We followed for a bit, but they were headed north and we would have had to buck the current, so turn around we did.

We must have been among the first to see the new orca calf.
(From Yahoo News, photo by Ken Balcomb, Center for Whale Research)

It was a memorable Christmas indeed and a successful sailing on the Blue Pearl…. ahh, I mean motoring. No matter, the saying goes, there is nothing better than messing around on a boat, especially when you do it on Christmas, eating crab, dodging ferries and being one with the whales.

Want to learn more about the new baby whale? Here are two articles you might enjoy:

There are so many mental and physical benefits to deep, intentional breathing yet we forget. At any given moment, stop and notice your breath. Likely, you’ll catch yourself taking short, shallow breaths or maybe holding your breath; happens to me all the time. Something as simple as one deep inhale makes such a profound difference for me and I just wanted to share.

Be excellent to everyone and don’t forget to breathe. 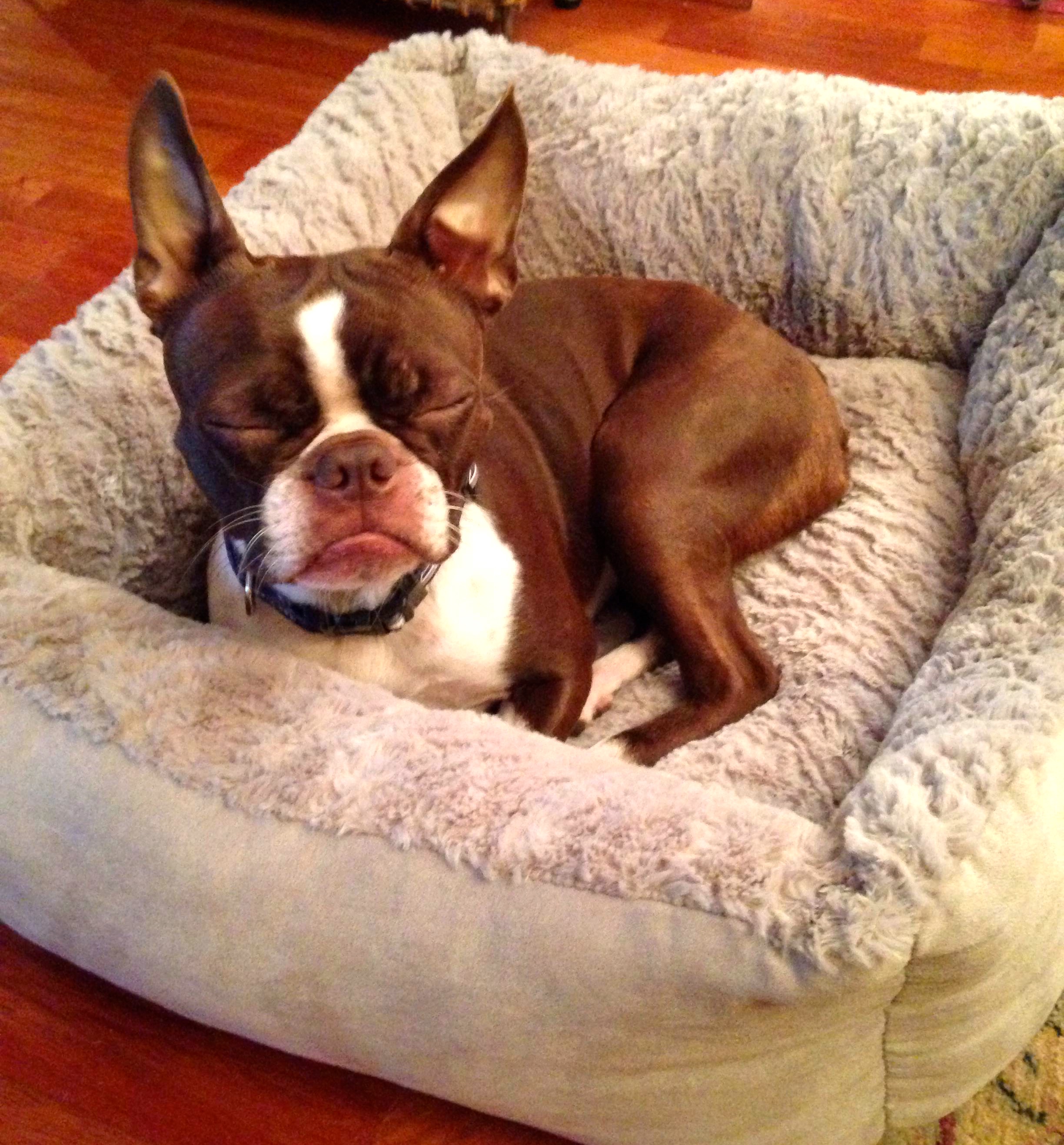