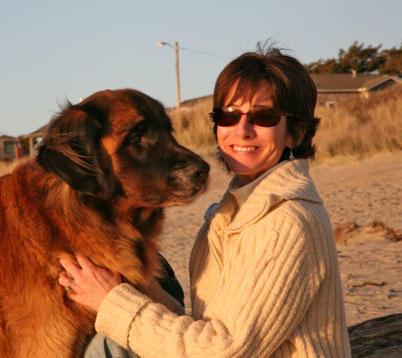 When Bob and I relocated from Florida to Orcas Island, our dog Murphy was 5-1/2 years old. That might be considered young for many dogs, but for Leonbergers who have an average lifespan of seven years, Murphy’s best days had passed. Or so we thought.

Murph turned out to be like Robert Moran of Rosario Resort and Moran State Park fame. Moran arrived on Orcas at 47 years old in such poor health that his doctors didn’t expect him to live to see 50. Of course Moran outlived all his docs. Orcas Island’s low-stress, fresh-air, outdoorsy lifestyle inspired the retired shipbuilder to live another 39 years!

Likewise our Murphy lived almost another full Leonberger lifespan after we moved to Orcas. Hiking Turtleback Mountain and Moran Park, paddling in the cool water off North Beach, patrolling the property for deer, driving around the island in his papa’s pickup to visit friends and collect hugs and biscuits, enjoying the temperate Northwest climate: Murphy had a lot to live for here on Orcas. The healthy, adventure-filled and extremely dog-friendly island kept him going well past what would be, in human years, his 100th birthday.

Murphy trotted off to Fiddler’s Green this past August at age 13. The following are a few of the many wonderful island moments Murphy and dogs like him have available here on Orcas. There’s also a shot of our new puppy Quinn, as he eases into the island lifestyle with his first boat ride.

Making friends with a Dungeness Crab

Lucky pooch with his own truck and private chauffer

Stopping at the scenic overlook during his daily walk

Waiting for UPS to bring his dog biscuits

Chilling out on a snow day at Turtleback Mountain

Cascade Mountains – less than a day’s drive from Orcas

Relaxing in his favorite salal patch

Like people, dogs have a great life on Orcas

Stay tuned for Part 2, where we take a closer look at some of the island’s pet-friendly perks!

An Adventure-Filled Vacation Without Leaving Home

One of the great aspects of living in an outdoor destination like Orcas Island is that people of all ages love to visit. There are so many fun things to do here that even teens who are normally glued to the virtual world of their smartphones and other gadgets find enough real life adventure to stay entertained.

In mid August my father-in-law and 16-year-old niece trekked out from back east to see us. Bob and I took the opportunity to unplug and enjoy a vacation in our own backyard. We packed a month’s worth of activities into a week, ate fresh-caught seafood almost every night and were reminded all over again why we chose to live in this far out northwest paradise. Our family photo album tells the story – click a photo to start the slideshow:

The adventure begins by arriving on a seaplane painted like an orca whale.

Day 1 starts with a boat ride to see whales. This J-pod male was cruising with his mates off Stuart Island.

We saw the most whales we’d ever seen at one time – including three lively calves.

On our cruise home we stopped to fish for the night’s dinner: pink salmon.

The one that got away!

Mid August is blackberry season. Each afternoon we picked fresh berries to enjoy on our ice cream. Yum!

Throughout the week we caught delicious Dungeness Crab to enjoy fresh out of the pot, in crab cakes and crab salad wraps.

Plus we feasted on the “lobster of the northwest”: Spot Shrimp, locally called Prawns.

Our terrestrial activities included a hike up Turtleback Mountain.

This scenic overlook on Turtleback Mountain made the perfect place for a picnic lunch.

The Saturday Farmer’s Market was an ideal place to pick up island-made souvenirs for the folks back home.

Meg piloted the dinghy to nearby Crane Island where we borrowed two kayaks.

Our kayaking adventures included scenic Mountain Lake. It was as peaceful as I’d always imagined.

After beaching the kayaks for snack time, we took a brisk dip in Mountain Lake. Brrr!

Every night we were treated to a spectacular summer sunset. This one took first place.

A last paddle on President Channel completes the perfect vacation.

If this type of adventurous lifestyle appeals to you, I’d love to help you make it a reality. I specialize in helping people in all phases of life move to Orcas Island. Contact me and let’s begin!

Comments Off on An Adventure-Filled Vacation Without Leaving Home