The Many Moods of “White Rock”

You’ve read our posts about Indian Island, the curious tiny island in Fishing Bay, Eastsound. Well there’s another tiny island off the west coast of Orcas Island that I’m curious about: White Rock.

Located halfway between Flattop Island and Waldron Island, White Rock is just one of 172 islands in the San Juan archipelago. But I happen to look out upon it every day. And therein lies its magic: Depending on time and type of day and season, it takes on a completely different mood. Take a look:

White Rock on a typical day

A lone soldier at sea

Aha! White Rock must’ve been named at about 11 am on a summer day!

Obliterated by a fiery sky on in late September

When we first got a boat a few years ago, one of my first requests was a closer investigation of this magical rock, actually the tip of an ancient submerged mountain. 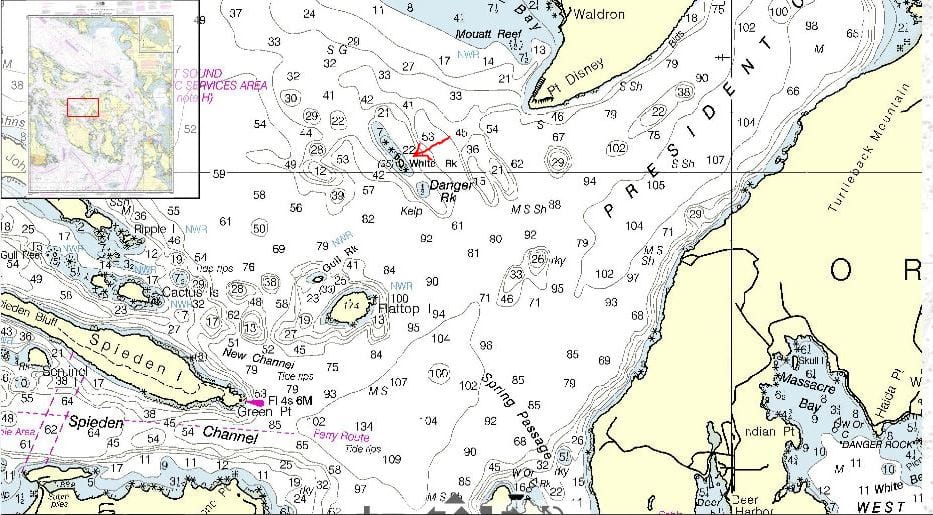 The red arrow is pointing to White Rock, southwest of Disney Point on Waldron Island. Part of the San Juan Islands National Wildlife Refuge, boaters need to stay 200 yards away – no landing ashore.

The Rock is more interesting than I thought — some vegetation and lots of orange stuff — a lichen perhaps?

To give you an idea of scale, note the harbor seal hauled out on rock

Soon we’ll be moving higher up the hill when our house is finished. While I won’t miss our current cramped quarters, I’ll miss gazing upon an ever changing face of White Rock, my trusty friend and focal point through all seasons.