Beauty from the Trash Bin: the Refined Art of Recycling 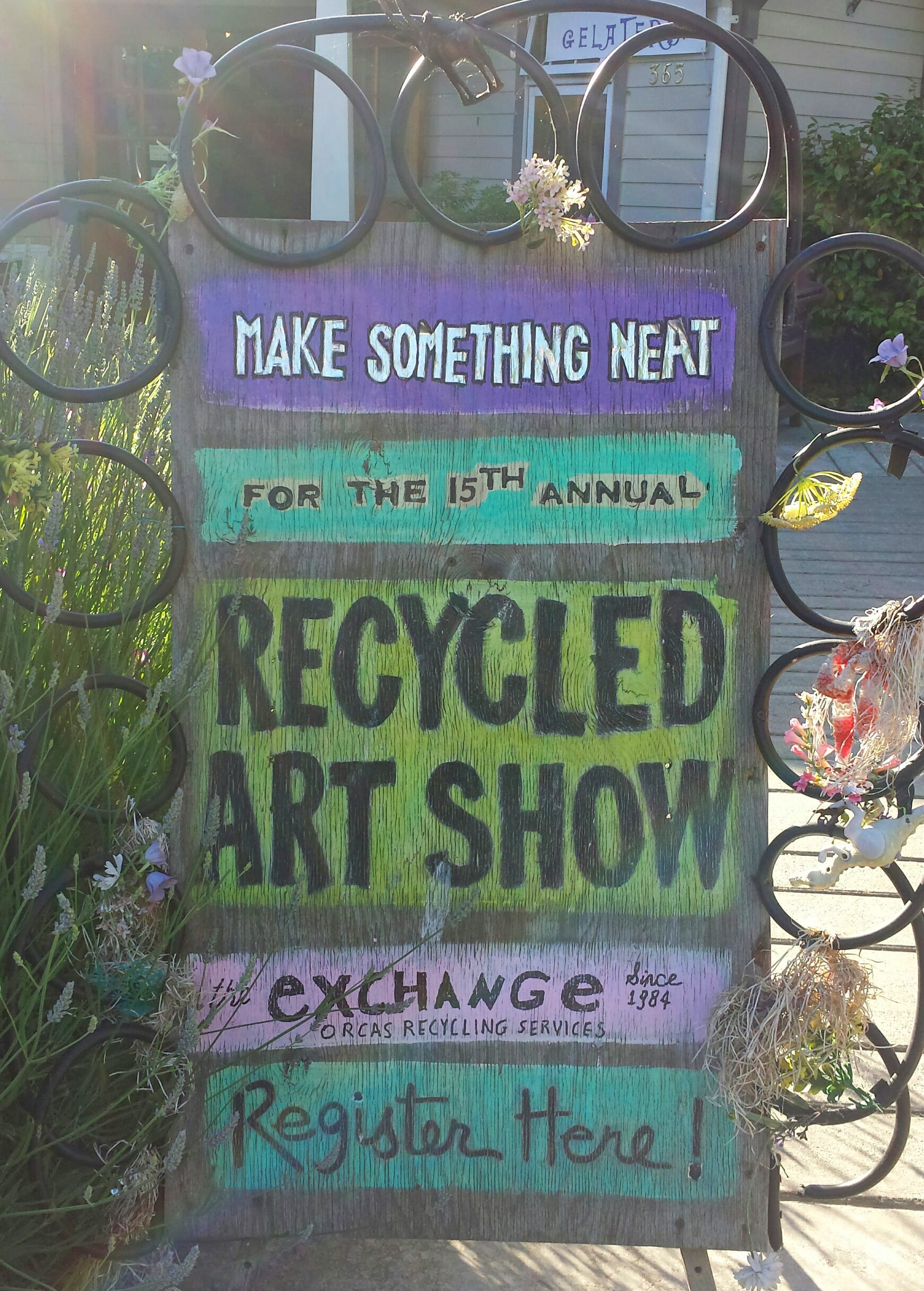 Orcas Island draws many gifted, resourceful, environmentally conscious people to our little community. So events like the yearly display of art made entirely of recycled items, naturally fit the creative island vibe. The 15th annual A.R.T. (Appropriate Recycling Technology) Show kicked off last Friday at Enzo’s Café in downtown Eastsound. Aficionados gathered in the gallery/eatery raved about both the quality of the artwork and fresh pizza spread. 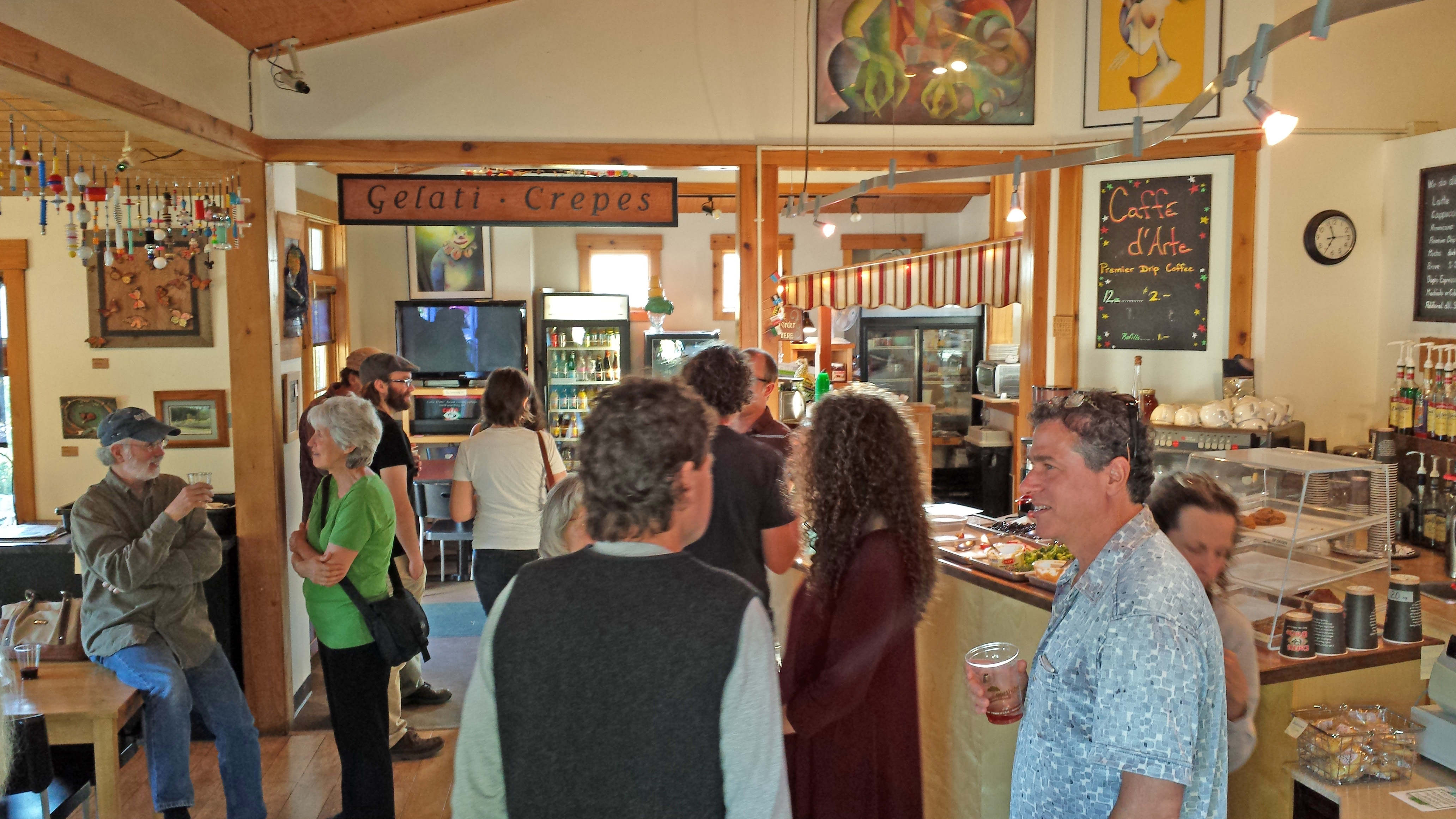 The show’s serious side is that it’s also serving as a fundraiser to help re-build The Exchange, our sorely missed local reuse center, which we lost to an accidental fire in 2013. According to the Orcas Recycling Services team, construction plans and permits are progressing nicely, and the new Exchange is slated to reopen later this year. 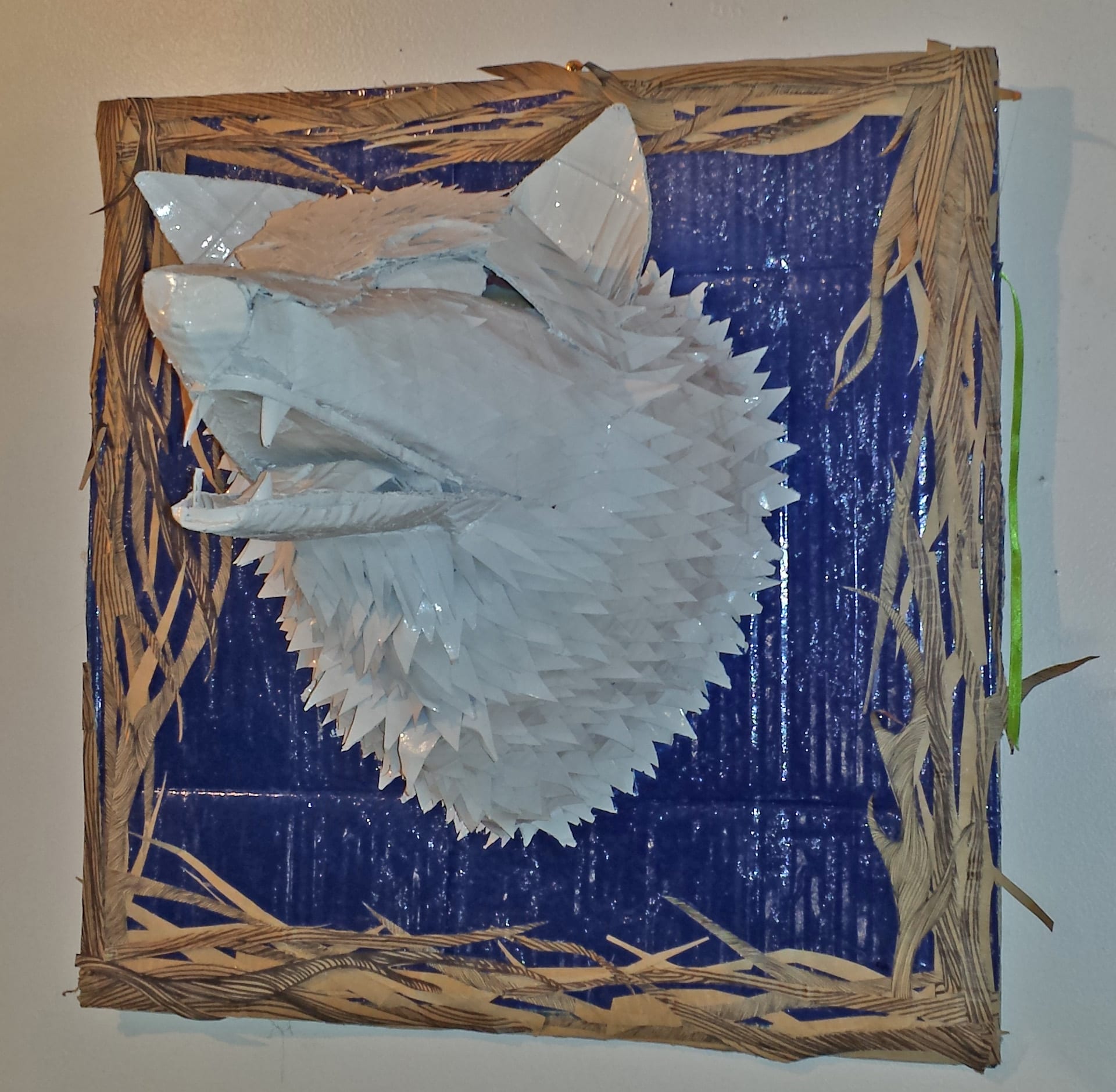 Past A.R.T. shows have included lots of items found at the Exchange itself. But with the Exchange temporarily out of commission, folks were encouraged to make use of what they have lying around the house. A majority of this year’s best pieces were created by recycled-materials artist Elise Antonio, from Seattle. Over the past year she’s experimented with cardboard, paper grocery bags and recycled wood. Elise uses nature as her inspiration, and I loved her white wolf! 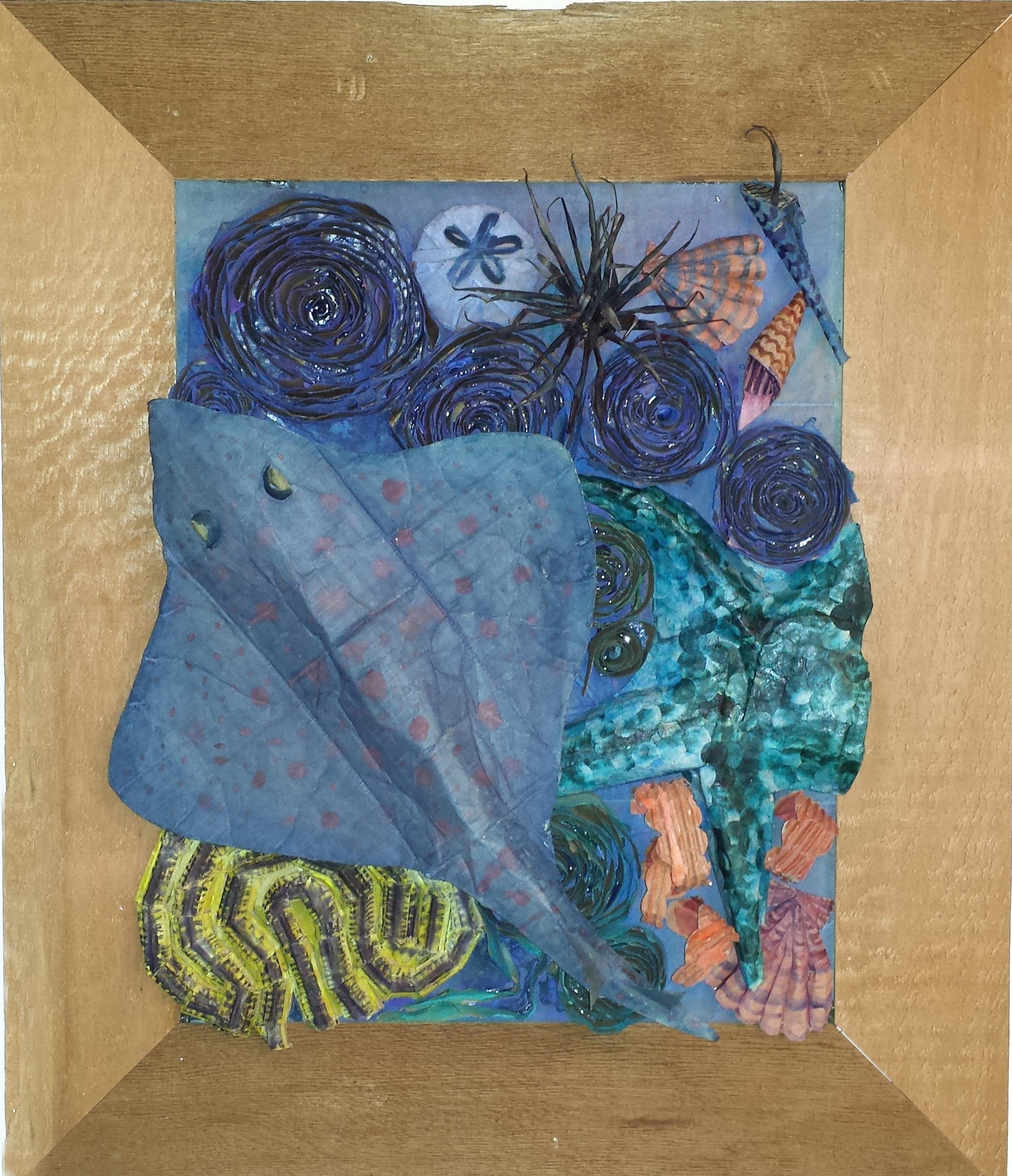 Other pieces were created using discarded toys and bits of what most people would consider trash. While I can’t draw, paint or carve, I have plenty of raw materials like this around the property just waiting to be recycled into something… Maybe attacking my junk drawer with a glue gun and some inspiration could create art!

Have you created anything artistic out of ordinary trash? Plan to enter it in next year’s Recycled Art Show!

Comments Off on Beauty from the Trash Bin: the Refined Art of Recycling

Although today is the official start of Spring, on Orcas Island we’ve been basking in the new season for a few weeks now. Locals are downright giddy with the longer sunny days, birdsongs fill the air and trees are bursting with buds and new life. I’m reminded how no matter what the season, the spirit of Orcas feels like it’s in a state of Eternal Spring — birthing new ideas and ventures, growing a vibrant and healthy community, evolving and inspiring, especially in the face of tragedy or setbacks. Here are a few recent examples that come to mind.

Orcas Island Food Co-op
This is one of the most exciting changes on Orcas, and it’s coming to fruition in a few weeks. Sprouting up at the location of the former Homegrown Market which closed its doors in 2013, the Orcas Island Food Co-op is a member-owned entity focused on providing local and organically grown food to islanders. It will also foster education about local agriculture and provide a strong link between farmers and the community. Already 500 members strong, the Co-op has assembled a great team at the helm, and with the help of numerous volunteers, doors will be opening soon. Kudos to all those making this a reality! 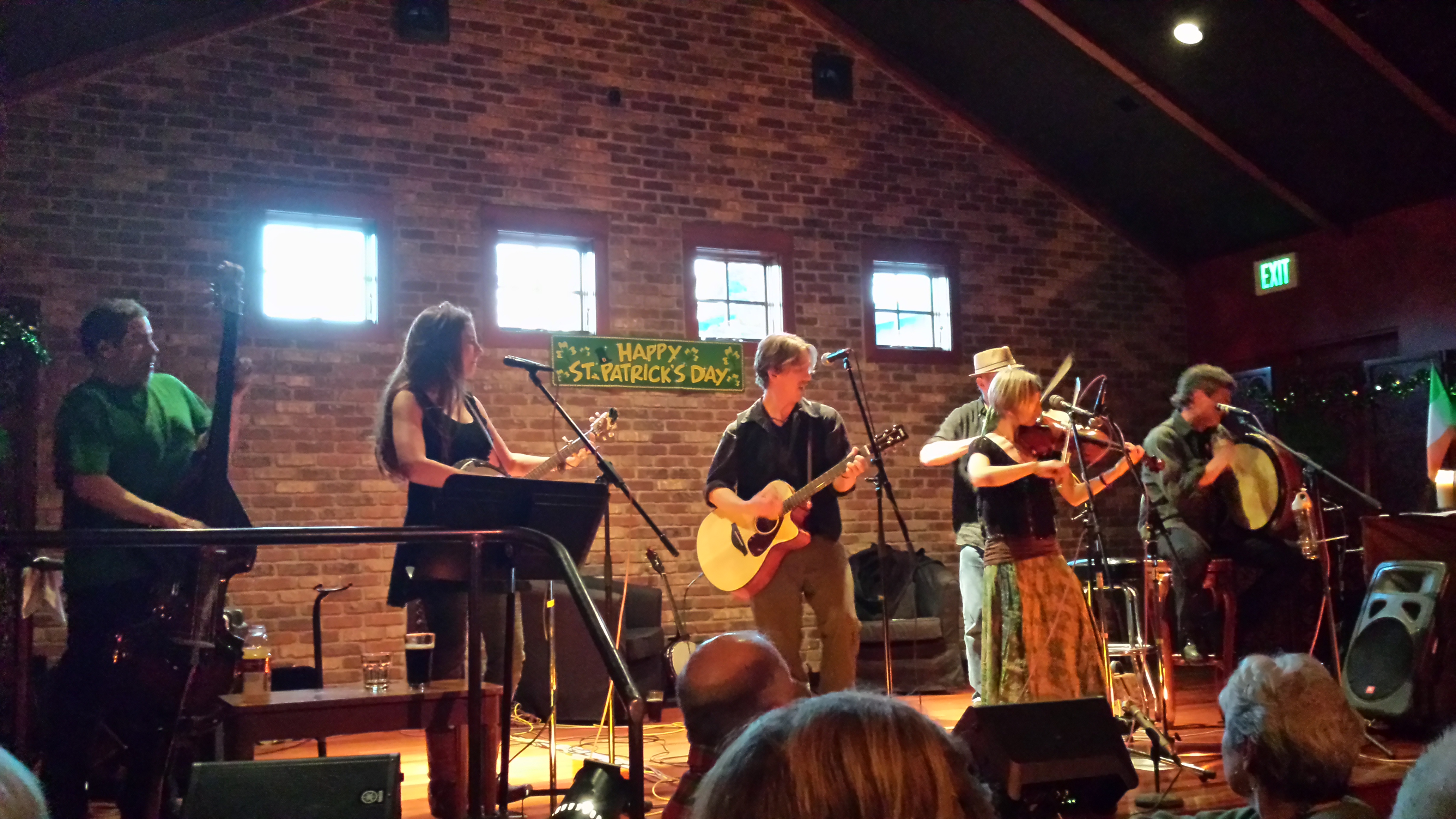 Random Howse
Random Howse was conceived last fall by Clyde and April Duke after they purchased an underutilized building in Eastsound. The building, complete with a stage and interior balcony, had been home to a series of restaurant ventures. Now, thanks to the Dukes, Random Howse is filling the stage with local talent — from musicians to comedy acts — and serving it up with top-notch food. It’s a fun casual gathering spot that’s enhanced life on Orcas.

Score! Nifty Thrifty
In early 2013, we lost the island’s popular re-use center — the Exchange — in an accidental fire. Plans are underway to rebuild it, but in the meantime two islanders sprung into action and opened Score! Nifty Thrifty in June. Filling a much needed void, owners Susan Malins and Tina Roye say that once they start turning a profit, they’ll donate 25 percent of proceeds towards local nonprofits. Their mission is “community sharing” and they plan to keep Score! available to islanders until the Exhange reopens. Thank you Susan and Tina for your community spirit and filling this need! 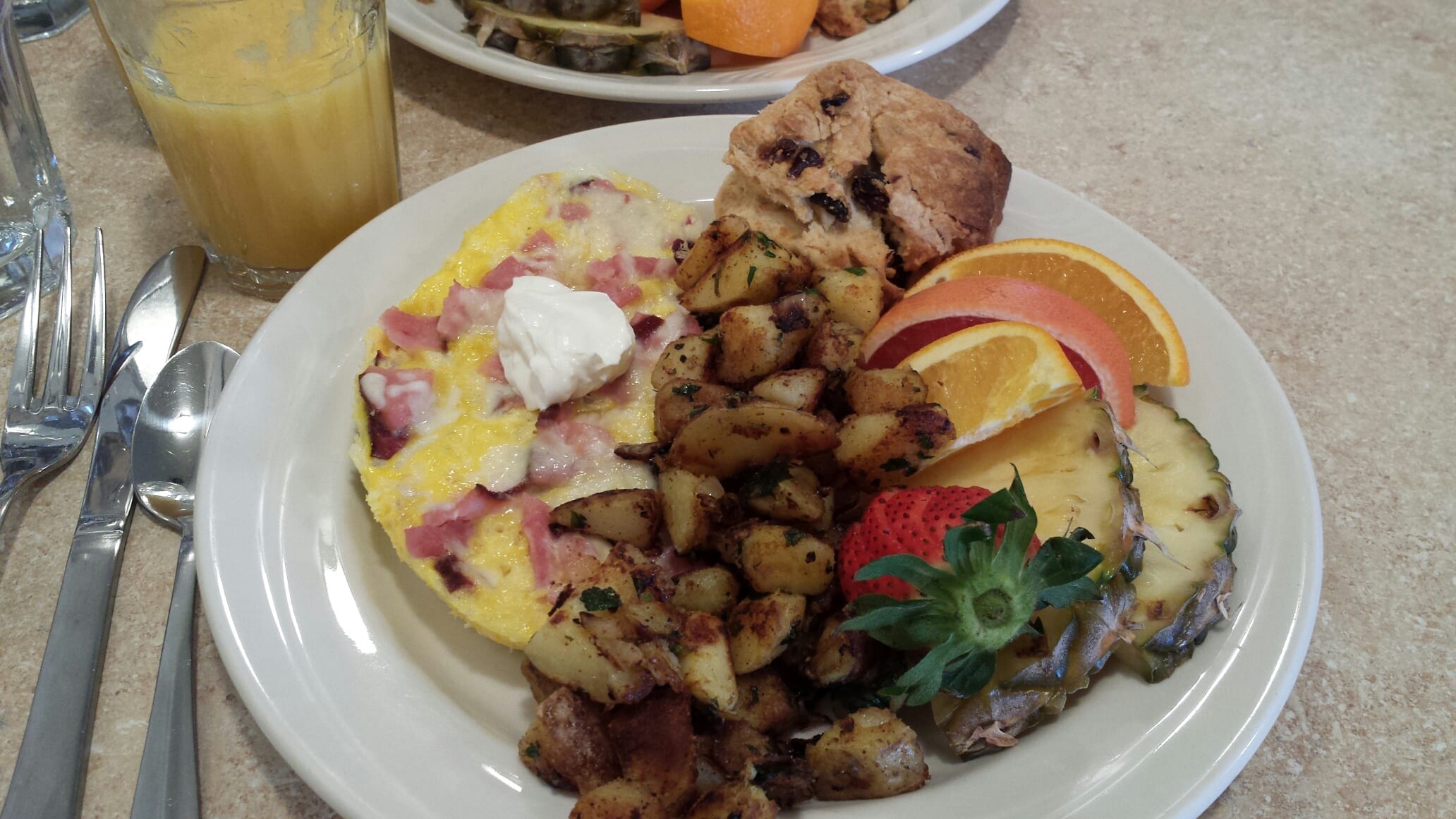 Hearty breakfast at Café Olga – just as delicious in Eastsound!

The Artworks and Café Olga
While we don’t want to be known as the island of fires, we had more than one last year. In July a suspicious fire ravaged the historic building in Olga which houses the Artworks (one of the oldest artist cooperatives in the U.S.), James Hardman Gallery and Café Olga. This happened at the height of tourist season, devastating the artists, café workers and owners. In nature, fire breeds new life, and it seems to have the same effect on the Orcas community. Less than a month after the fire and with a huge volunteer effort, the Artworks and James Hardman Gallery re-opened in a temporary location in Eastsound. Later in the fall, Café Olga reopened in a temporary Eastsound location. Public donations and support have poured in to help the Olga Strawberry Council renovate and reopen the historic building in Olga. It’s just not possible to dampen the Orcas spirit. 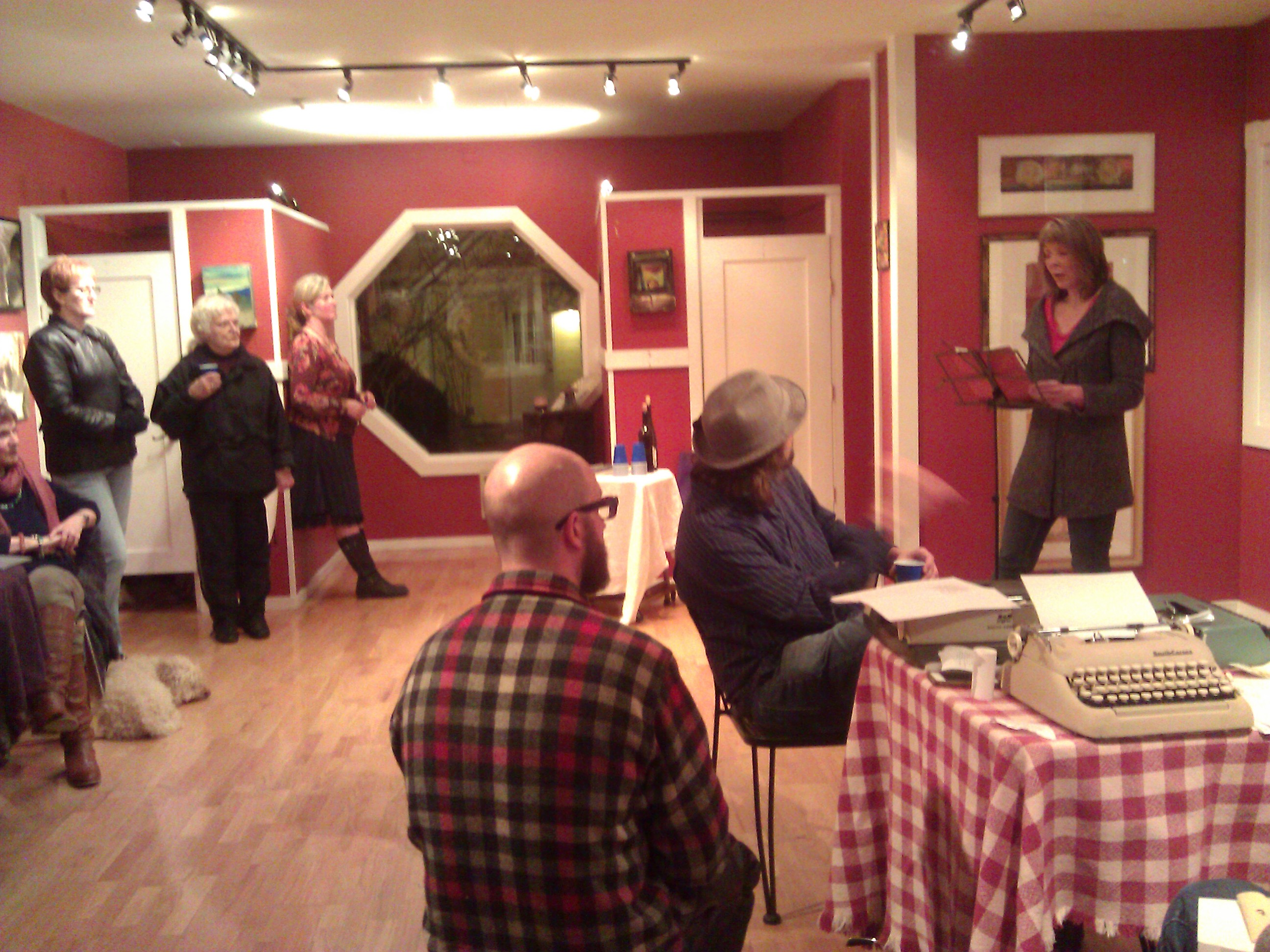 Poetry reading by Suzanne Heyd at “The Garret”, a pop-up gallery in Eastsound

Pop-Ups
Like spring bulbs that pop up to bring color to a small area, pop-up businesses and ventures bring an unused building to life for a short time. There were three pop-ups in Eastound last year, and I visited all of them. Locals Andrew and Emily Youngren opened Pop-up Print Shop for the summer summer – a very cool T-shirt store with unique local designs and ability to print while you wait.  The Garret was a pop-up gallery for one weekend during Art Walk, with poetry readings, live poetry compositions and art by Susan Slapin. Orcas Island Originals was a pop up gift shop for the holidays in the Shearwater Kayaks shop, during the non-kayak season. I think the pop-up is a neat synergistic concept and here to stay.

Finally, fittingly, March 20th is now also designated as the International Day of Happiness. I think this recent video captures the spirit of eternal spring on Orcas Island – playful and vibrant at all ages. Enjoy!